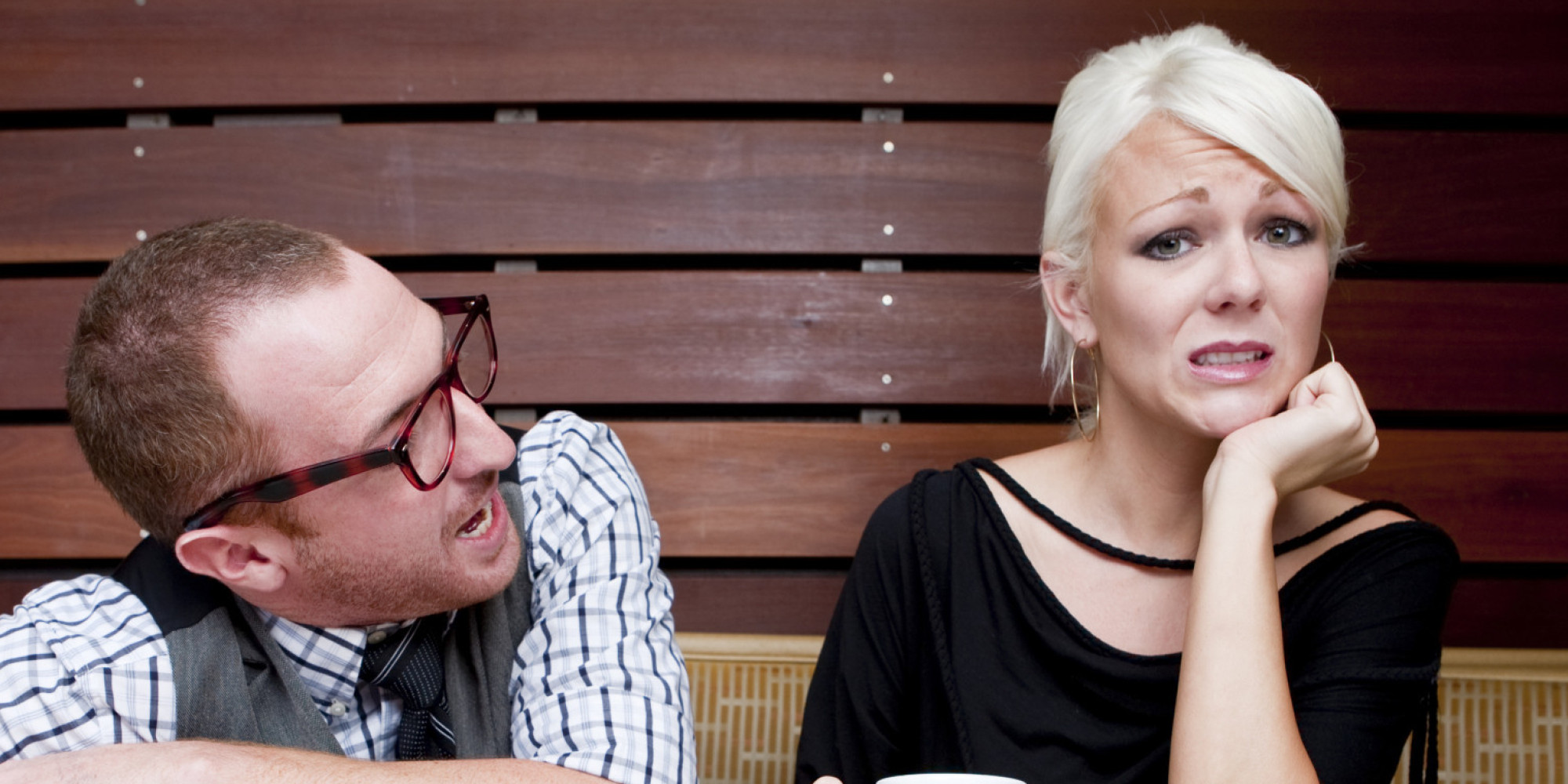 Have you ever had a bad date? One so bad, you don’t know whether to laugh, cry, or light a few candles and burn sage to erase the bad date vibes in the air??

Well, one young lady shared her disaster date with CiTLR.  We almost feel bad for laughing, but this is one date that will definitely go down in the books.

I met this guy through one of my good girl friends. Actually, he was one of her new boyfriend’s friends that I had met at her birthday party. We exchanged a few flirts at the party, and that was that. Well, once the pictures from the birthday party started circulating on social media and we were all recapping the craziness of the night in the comments, he sent me a friend request.

Now, I usually wouldn’t entertain a friend of a friend etc, but he was charming and kinda cute, so I accepted. We sent each other private messages on social media, not really talking about anything, before finally exchanging numbers. And, after a few conversations we decided to go out. 2 dates in and we’re having a pretty good time. He’s not my usual type (looks, build, etc) but like I said he was charming. So 2 points for him.

For our 3rd date, we decided to grab some breakfast at a diner not too far from my house. Now, usually, I wouldn’t let anyone know where I lived this early in a “relationship,” but he insisted on being a gentleman and picking me up. My creep-o-meter hadn’t gone off with him yet, so I obliged and gave him an address around the corner from me. Mama ain’t raise no dummy, ya know.

So we’re at the diner, eating breakfast, talking about life and plans for the summer. I had my regular breakfast favorites: bacon, eggs, and pancakes, while he had a waffle with sausage. I was just about to ask for a refill of sweet tea, when I got a cramp in my stomach. It caught me so off guard. I had no idea my date was waiting on a response from me. Apparently, he asked me something along the lines of what my favorite place to vacation was. But, I really couldn’t focus. And forreal forreal, fuck a beach right now, something was brewing inside of me. A few minutes later, another cramp rippled down my side and over to my stomach. I tried to stay engaged in the conversation while running a full body scan in my head of what could possibly be wrong with me.

I’ll be honest, I’m over 30 and my digestive track has changed. I can’t just eat every where anymore without repercussions. I try to avoid any problems by not eating pizza, ice cream, or tacos after 8pm. You gotta know your triggers. But by the 3rd cramp, I already knew what was about to go down.

I’m watching this fool take the smallest bites of his meal. I know it’s probably not proper etiquette to down a sausage on a date with a lady, but SIR please Supahead that thing and let’s go. By now, I’m starting to feel hot, and pressure is building in my belly. Irritated with everything about this dirty hole in the wall diner, I asked for the check. I hadn’t listened to a word this guy said in the last 10 minutes, and now he’s starting to ask dumb questions. “Am I ok?”

What I really wanted to say was “No SIR! I’m not okay! Just take me home before I Uber out of here.” However, I was kind, and said I’m not feeling well. Dear lord, why didn’t I just say what was in my head. Now, he wants to diagnose me. “What’s wrong? How do you feel?”
Again, what I wanted to say was “SIR, I feel like a tsunami of partially digested pancakes, greasy bacon, and under-cooked eggs is about to flow all through this hell hole diner via my ass in 2.2 minutes.” But I kept it kind again, and just asked if he could please take me home.

Any other day, his concern for my health would have been honorable. But at this point, he’s getting on my last nerve. I sat across from this fool sweating, tapping my foot uncontrollably under the table, while shifting from cheek to cheek for 10 minutes. We are in a code red situation. When I saw him slowly open the little folder to sign the receipt, I snapped.

I grabbed the pen, signed a name, snatched his keys off the table and swiftly walked toward the door. “Hold up!” he says standing by the booth.

What I really wanted to say was “Please come with me to your vehicle so that I may be transported home in a timely fashion!” You know something kind.

What I actually said was “Bring.yo.ass.on NIGGAH” at the top of my lungs in the middle of this shit hole diner.

I know by now you’re wondering, why didn’t you just go to the bathroom at the diner. And looking back now, I probably should have. But, I panicked. See I had tried to release some of the pressure in my stomach after cramp 3. But it wasn’t just pressure. It was a lb of this greasy spoon diner bullshit trying to jump out of me. I was able to cut it off, cork it up I guess you can call it, but I HAD to get home ASAP.

The light jog to his car seemed to have escalated the process. Things were churning inside of me and my stomach was making all types of crazy noises. Again, I was panicking and not thinking clearly. We were 5 miles from my house, why on earth would I risk being stuck in traffic in my condition.

I’ll tell you why.

I was on the verge of losing my mind.

See as an adult, your body just won’t let you shit on yourself. Not while you are awake and have function of all 5 of your senses. I don’t know how babies can just drop a load in a pamper and keep it moving. Your human brain will not let you do it without breaking you down, mentally. Because it’s wrong and YOU should know better. YOU KNOW BETTER.

We got to his car, and we both headed for the drivers door. If anybody is gonna get me home, it’s gonna be me. This is my side of town, I’m familiar with these roads. Also I need to be in control of the wheel in case we have to make an emergency stop. I don’t have to be explaining SHIT to this fool. I guess I had the look of the devil in me because he didn’t even try to debate who was gonna drive, he walked around to the passenger side and got in.

I couldn’t even sit down in the seat, there was so much pressure in my stomach along with these constant waves of cramps. Fuck it, I gotta get home. I’m damn near standing up, butt no where near touching the seat, balling out of the parking lot. We made it to the main road and got caught at a light. At this light, I lost my mind. I beat the steering wheel with my fists and screamed “No!” probably twenty times.  Then I started crying. “Why was this happening to me?” Was this because I pushed little Jessica down the slide in 6th grade? Is this because of that time I gave a fake name and number out at the club? I thought about all the times I had been a jerk in my life while crying out hysterically. Then the light turned green.

The light turns green, and we’re off again. I’m standing up in the seat, riding up on people, changing lanes erratically, crying and praying at the same damn time. For 2 miles, I forgot ole boy was even in the car with me. He hadn’t said a peep. In fact, I glanced over at him during a moment of clarity and he looked scared for his life. Now wasn’t gonna be the time to explain all this, we had 3 more miles to go.

I’m pushing his car to all kinds of performance limits. I’m flooring it and braking crazy. I’m also getting caught on every speed camera along the way. 2 miles away from home and we had a near death accident. I’m still standing up in the seat, and thank goodness I was, cause I needed my whole body’s weight to apply to the brakes. We were good tho, nobody’s car connected.  But, he belts out “What’s wrong with you, you crazy bitch!” Now he’s crying and hitting the dashboard like a maniac. I guess that was too close of a call for him. But, I’ll apologize later. Trust me, at this point, if I could have shit in his seat, I would have. Just to be through with this whole ordeal. But I couldn’t. My brain was saying “You’re too old to be shitting on yourself dammit! Floor this thing, and get home to your bathroom.”

We’re a mile away now, I’m still crying and praying and he’s begging to get out. He tells me to just take his car, and release him. Like I’m holding him hostage or something. The nerve of this dude. Now I’m yelling at him because he begged to pick me up “in the first mf’n place.” I’m trying to devote all my strength and focus my energy on keeping my cheeks together, protecting him and his raggedy seats from awful things he’ll never forget but he wants to argue.

Finally, we turned down my street. I drove his car across my grass before throwing it in park, saying bye-bye to his transmission, and hopping out.

“Wait, where are you going?” This fool had the nerve to ask like he wasn’t just begging me to let him out on the side of the road.

I didn’t have time to dig in my purse and find my keys, so I ran around to my back door and let myself, I heard in slow motion, him yell “whoo theee fuckk liveees heeeeeereee” and then his tires screeching.

Wholetime, I forgot he had picked me up for our date at another house around the corner.

I never heard from ole boy again. I texted him a few times to apologize and no response. He even unfriended me and blocked me on every social media site we shared.

Talk about a DIS-ASSTER date!!

Do you have a bad, strange, or hilarious date story to share? Let us know and have your story featured here!