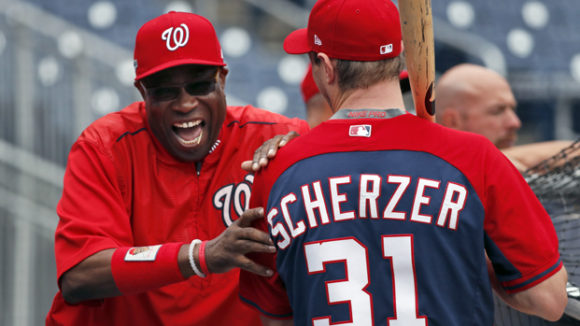 For the Washington Nationals’ Aug. 18 game against the San Diego Padres, manager Dusty Baker trotted out a lineup that featured newly-acquired veteran Howie Kendrick in left field, Wilmer Difo at shortstop, Adam Lind at first base, newly activated Michael Taylor in center field (a player who missed five weeks with an injury), Andrew Stevenson in right field and Matt Grace on the mound in an emergency start.

Situations like this happen all the time during the long baseball season, but if it feels like this year’s Nationals team has had to endure more injuries than normal, you’re correct. But the one constant has been the leadership of Baker. When Baker was hired as manager, one of the things fans were worried about was Baker’s age. Would it cause him to make certain missteps in managing the game? It seems as if being the oldest manager in the sport has prepared him exactly for this moment in his career: he has seen it all before.

Early in the season, injuries took a toll on the squad’s secondary players but the stars seemingly carried the team to the divisional lead.  Since the All-Star Break, huge injuries to core stars like Bryce Harper, Stephen Strasburg (who just returned from the disabled list on Aug. 19), and Max Scherzer could have doomed the ballclub’s chances of coasting into the playoffs. But that hasn’t been the case. The team has continued to win, still riding high with the third-best winning percentage in the sport. That all stems from leadership from the clubhouse.

It comes from the small, minute details of his Baker’s lineup changes, like having Anthony Rendon continue batting in the sixth slot when conventional wisdom would move him up higher in the batting order because of how well he has been raking. Now that looks like a great decision because as soon as strong contributors like Trae Turner and others return, the lineup will become even more powerful for the upcoming playoff run and Rendon won’t have to readjust.

Baker, one of very few Black managers in baseball, should also be praised for juggling the meteoric rise of the bullpen, which was so awful for the first three months of the season. Reinforcements were acquired at the trade deadline in Brandon Kintzler, Ryan Madson, and Sean Doolittle, and the bullpen has been pretty solid since. Righty Matt Albers has revitalized his career with a 2.03 ERA, and along with lefty Oliver Perez, are trustworthy relievers. But the Nationals could also lean on a bullpen trio of Kintzler-Madson-Doolittle for just about every important inning in October. The relievers say their transition, together, has been seamless in part because Baker has used them in consistent roles and also because they felt appreciated and welcomed in the clubhouse.

That all starts with perhaps the most under-appreciated man in D.C. sports today: Dusty Baker.