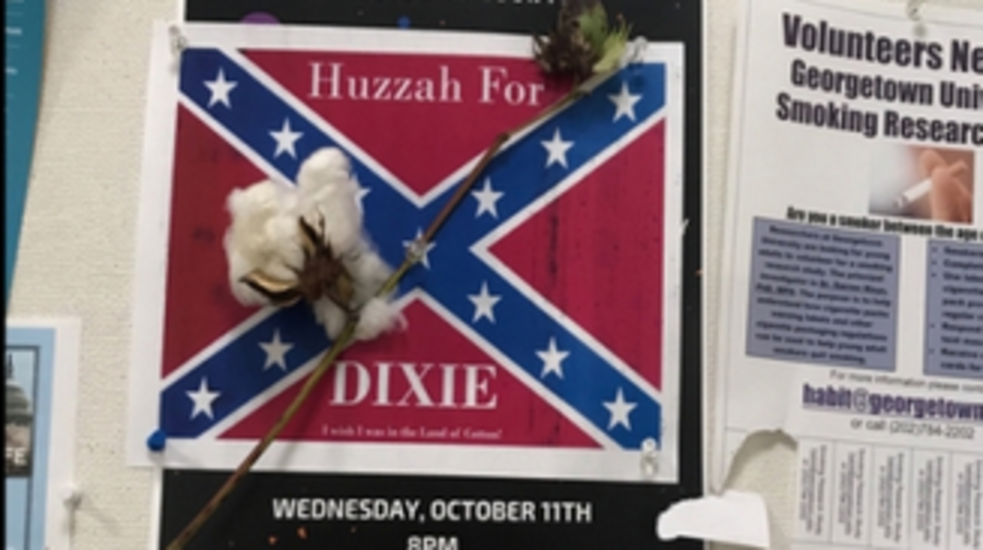 The approval of Dixie… 150 years removed from the defeat of Dixie. It is quite interesting to say the least. This picture is a flier that was posted in ten locations throughout American University. I’ve stopped saying “How is this happening in (insert current year here)” as a response to racism. People don’t tend to grow out of racism; they just raise kids who grow into racists themselves.

The cotton on this flier is really interesting given all of the talks about protests , social injustice and oppression against Black people. In 2014, Ta’Nehisi Coates wrote an article that details how slavery made America. A few quotes that stand out for me…The following quotes are from the article but specifically from David Blight during his course at Yale, “The Civil War and Reconstruction”: …by 1860, there were more millionaires (slaveholders all) living in the lower Mississippi Valley than anywhere else in the United States. In the same year, the nearly 4 million American slaves were worth some $3.5 billion, making them the largest single financial asset in the entire U.S. economy, worth more than all manufacturing and railroads combined.

The civil war was about the argument over taxation of slaves and their labor. There many people making arguments about the taxation issue and went on record writing letters and statements about this issue. The slave owners wanted to avoid paying their full fare for the ownership of their slaves. Here is one letter that gives you the gist of the debate. The southern states were so upset that gathered up arms, formed the Confederacy, and went to war with the United States of America. The Confederacy was the biggest act of treason in the history of our country. The definition of treason: the crime of betraying one’s country, especially by attempting to kill the sovereign or overthrow the government. The Confederacy went to war with the States….lost…and their punishment: memorials in their honor throughout the country. Not long after the war, Jim Crow, Black Codes, denying the Blacks the right to vote, and sharecropping were signs of the same ole South…

Back to the cotton on that Confederate flier. Again…. in 1860… slaves were worth more to the country than the railroads and manufacturing?!?!? Think on that…

It is estimated that the United States of America became a global powerhouse economically and as a military starting between 1870-1900. How do you think that became the case?? How do you think this great military was funded? Given the facts about the economics of slavery in the 1860s (just before we emerged as a power 10 years later), how was the military funded? The evolution of America as an economic and military powerhouse was funded through the labor of slaves…period. There is no getting around that. We have this convenient love affair with the flag and military all of a sudden when the protests of the anthem arise. Our privilege to have that love affair came on the backs of the ancestors of the very people leading the protests. That is why they protest. Because the financial advancement of a few thousand Black athletes is not a reflection of the Black plight.

The poor and disenfranchised won’t and don’t have voices in this country. If not the wealthy who care, who else will speak for the oppressed? We live in a country where lobbyists submit legislative pieces to congress without the representatives reading the legislation. We live in a country where our elected officials are raising money for campaigns on a perpetual basis. I’m not condemning these actions. I’m simply saying these are examples of the poor not having the resources to speak for themselves. So why is it crazy that a rich, black athlete would speak on behalf of oppressed Black people? Who else will/would do it and have an impact? “You have millions. You’re spoiled. You aren’t oppressed” are the statements the detractors make.

There are maybe 2,000 Black entertainers in sports making millions. The Black population in the U.S. is right under 40 million. You can’t use Black athletes as the benchmark for “success” for Blacks as a whole in this country. In the event that a Black is educated and wealthy, those statuses serve as “freedom papers” for those Blacks. “He owned a business”. “She was a college graduate”. “He lived in a nice home”. These are things we say when Blacks are killed senselessly. Whether they are killed by their own kind, or by others, we use these caveats to give basic value to Black lives. Education and wealth won’t serve as tools of advancement for Blacks. They serve as defense mechanisms to defend our basic value on earth.

We say “Black Lives Matter” not because others dont. But we have to remind the world and ourselves of what should already be understood. But that understanding is not yet clear. The value of our lives hasnt been established…but the value of our work is undisputed. Which is why that cotton is attached to that flier. So the next time you have a military argument in response to the anthem protests, consider showing love for slaves who funded that military. I want the same intensity (@michaelirvin88 voice) for our heroic, Black slaves when Black History Month arrives. You see, they didn’t have a choice in their “service” to this country. The slaves and their descendants caught up in the sharecropping scheme made the biggest sacrifice for the economic development of this country. When their modern descendants point out continued injustice, the least we could do is acknowledge them and show concern.

But instead, we’ve again appeased the people who experience the most privilege in this country on a regular basis. The people told Kaepernick to “meet us halfway”..then he kneeled. When he did they moved the line determined to be “halfway” closer to them. The line has been moved so much that the privileged haven’t even budged to meet the protesters at a common point to discuss the issue. The Baltimore Ravens claim to be dedicated to the community, but wouldn’t sign Kaepernick due to his protest against police brutality. In that same city, at that same time, police officers were caught planting drugs on Black people. That caused 50 pending cases to be dropped. If the Ravens are committed to the community, they would consider assisting in funding organizations that do pro-bono law work for the poor….the poor people who have to plead out to cases where they are innocent but don’t have representation. That’s real community work.

I could go and on…

But, there is one that that prevails in all of this: the privileged of this country will find no end….when it comes to defending their “cotton”