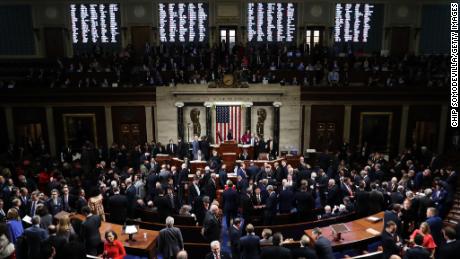 Just a few minutes ago, Donald J. Trump, 45th President of these United States, was impeached after a majority vote on two separate impeachment counts in the House of Representatives.

I watched the vote happen live on CNN, and then got on Twitter to read commentary— because I am obsessed with politics. Always have been.

I noticed that ‘Vice President’ was trending. Had no clue why until I read some of the tweets…

…and then I realized that y’all ain’t pay attention in civics, because folks really thought that tomorrow morning, Mike Pence would become the 46th president of the United States.

People were celebrating all up and down my timeline. “Trump is impeached! We are finally rid of him!” And my first instinct was to talk cash shit to these grown-ass people who had no idea what was going on. But I’m practicing being a better person, so I decided to take to my computer and learn y’all something on this evening.

You sitting down? I’m about to give you a crash course in civics like only I can.

Impeachment is a process- a very long, very cumbersome process- that was established in the United States in 1787 that states if the President committed treason, bribery, and/or other high crimes and misdemeanors while in office, he or she would be held accountable for his or her actions, as no person, President or otherwise, is above the law. The idea was that impeachment was a safeguard against authoritarianism, aka a leader who does whatever because the law doesn’t apply to him/her. Impeachment holds the President to task. It’s like saying, “You might hold the highest office in the land, but you can go to jail/ catch these hands just like everybody else.”

Except it’s not quite that simple, because nothing ever really is.

There were safeguards put in place to make sure Congress ain’t impeach folks all willy-nilly for stupid reasons. The Constitution establishes very strict guidelines for how the process should happen. First, there’s an impeachment inquiry and a bunch of people talking to establish whether or not there is enough evidence to impeach. After hearing testimony, articles of impeachment (the charges against the president) are established, and the Judicial Committee votes on whether or not these articles of impeachment are valid.

Then the House of Representatives votes. If the majority votes for impeachment, then the president is impeached, which is what happened tonight. But impeachment, my loves, does not mean removal, much to my chagrin.

It simply means the articles are taken to the Senate, and then there is a whole lot more talking and arguing and yelling and folk being froggy, same as what we saw in the House. And there’s a trial, and then another vote. If the majority of the Senate votes to impeach, the president is THEN removed from office. He packs his shit and goes home and the VP gets the Oath of Office that very same night.

Impeachment almost never happens because the process is cumbersome. It’s long and annoying and everybody gets tired of hearing about it. It’s not meant to be simple, because impeachment should not be taken lightly. It’s only used when the President does some legit big wild shit that must be addressed.

Well. This president did some big wild shit and the House found that he should be impeached on 2 articles: obstruction of Congress for refusing to cooperate with Congress on these investigations (he has flat out REFUSED— because that’s exactly what innocent people do, right?) and for abuse of power because he solicited interference of a foreign government, Ukraine, in the 2020 election (same shit he did with Russia in 2016 but he managed to keep his hands clean enough for nothing to be traced back to him).

So tonight, Nancy n’nem voted to officially impeach Agent Orange, which means the Senate must now hear evidence and vote on removal, which probably won’t happen until early 2020.

So pipe down, y’all. The biggest atrocity in America since slavery is still in there, red-faced, indignant, and tweeting like shit (probably on the shitter) until the Senate votes to remove him- which, according to Senate Majority Leader Moscow Mitch McConnell, will not happen.

Impeachment is one thing, but impeachment and removal is a whole different beast, and we just aren’t there yet.

But what DID happen is Trump became only the third president in the history of this country to be formally impeached by Congress- Andrew Johnson, Bill “I did not have sexual relations with that woman!” Clinton, and Donald Dumbass Trump. No matter the results of the Senate vote, this impeachment situation is a stain on his permanent record, another ugly spot on what has already been a shitshow of a presidency for him. He can’t tweet it away, or lie it away, or whitewash it. The reality is, enough people thought he was incompetent to launch this whole long annoying process… which has only happened three other times EVER.

He has been so desperate to make history. Well, tonight, he did.

Richard “I am NOT A CROOK!” Nixon was smart. He knew that ass was caught, so he took the high road and resigned before the impeachment process could begin. I believe with my whole heart that Donny is a criminal, but he doesn’t have the tact to just step down and shut up, which made this whole lengthy process necessary.

And that, my friends, is impeachment in a nutshell… a whole unit of U.S. civics in a few minutes.

So. NO. Mike Pence is not the president. (And have y’all read his bio? I promise he ain’t too much better than Donny.) Trump is impeached because the House voted for his impeachment. Now the situation moves on to the majority-Republican Senate, and barring some miracle where people actually grow a pair and vote for what’s right and NOT for what’s Republican, it will likely die there.

I will personally be so glad when this shit is over. I miss not being able to watch my shows because old surly white men are arguing on every single channel. Jeopardy didn’t come on tonight and I’m still salty about it.

I think that’s it. Let me know if you have any questions. If I don’t talk to you before next week…