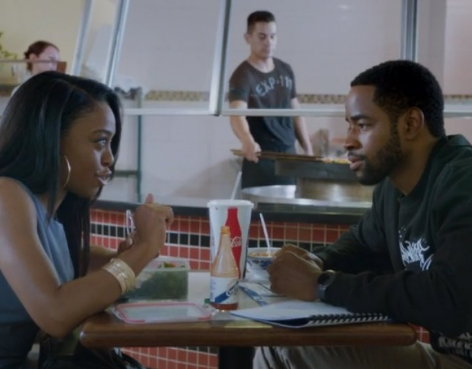 Finally, we can put this Lawrence and Tasha future life, future wife fantasy to rest.

I know some of yall were hoping that this relationship would be official and serve as some sorta payback to Issa for cheating. Yall wanted Lawrence and Tasha to pop up on her while he sings Bryson Tiller lyrics “…I’m back and better.”

Butttt .. Hold that wish for now.

Let’s discuss some of the warning signs from this situation that anyone on the dating scene can learn from.

1. Fresh off a break-up. Unless the person spent the last # of years completely repulsed by every breathe their ex took…chances are they need time to heal. This was a five year relationship that ended abruptly due to cheating. Issa may have been feeling some type of way beforehand about him, not being sure if he was the future she wanted, but from what we saw…he was all in. He just happened to be going through a rough patch in his life. He didn’t even have a chance to process the five years being pissed away before he was hopping all over the bed with Tasha. Rebound sex was bound to happen, we know that. He’s a man who was committed for five years, of course he’s going to find some tender thing to take his frustration out on. Will she be his next leading lady tho? I say I’m not sure, but probably not. Everyone needs time to heal and move on.  Does it take years? No.  Is it a risk to date someone newly single? Yes.

2. She’s different. Hey, everyone likes what they like. You have your preference of height, weight, etc when lookin for a mate. Sometimes a great personality will outweigh height. Sometimes a healthy financial portfolio will outweigh a not so cute face. No judgment here. But, I’m a just say it. She’s probably not his type. Her and Issa are very different. Tasha gotta little ratchet edge to her, but in guy lingo “she’s cute, phat and fucking” Maybe overall, it’s too much for Mr. IT Guy Lawrence. Maybe it’s too soon of a change for him. He was thrown into the single life.  Maybe he wants something similar to Issa just not Issa. Who knows. But it was apparent at the end of episode 3, he’s just not into Tasha. Right now.

3. He already hit. There’s no right or wrong answer as to how soon should you decide to lay down with someone. If you ask Steve Harvey, its 90 days. The Good Book says wait until your married. Decisions. Decisions. Ladies there’s nothing wrong with seeing if your compatible…sexually. But because a male’s brain is 20 years behind ours, you have to think like an 18yr old and understand once he hits the courting is essentially over. Courting is for them to prove their worth…give you good conversation, take you out for some fun times…show you how great they are so that you will reward them with a slice of poonanny pie. Once he gets the pie, kiss that courting bye bye. In this scenario, once he hit, there was no need for outside (the house) dates. He had his weekend schedule in place, show up Sat for check-in…hit hit hit…Check out Sun. Rinse & Repeat. There were no dinner dates, no weekday hanging out, no expectations set of him having to prove he’s a great catch with his clothes on. You want a guy that’s gonna hit and still date you after…get you somebody 20 years older or with an old mind lol. Fellas, don’t taze me.

4. She wanted him too much. So there’s an old saying that you should be with somebody that wants you more than you want them. Maybe Tasha saw a good man in Lawrence that day in the bank, even though he did tell her he had a girlfriend and was in a relationship. But anyway, she saw something in him that made her willing to give him a chance. At what cost tho? He tells you off the break with your initial flirt that he’s in a relationship. He shows up shortly after saying “hey what was that about me and you again?” First thing you do, grill him like a Ballpark glizzy. Who, what, when, where, why…then you top it off with “Is it done or is it finished?” Clearly, there wasn’t enough questions asked when it came to Lawrence and his all of a sudden single status. No matter how bad you want them, if they don’t want you, it won’t matter no way.

Again, Tasha should have put some demands in. Why don’t you take me out? Take me out. Why do you only come over on the weekends? Stop coming over to just have sex and spend the night. Make your demands, and if they don’t meet them, you cut them back. He had no penalties for coming in and out as he pleased. He slept with ex, and again after 2 “TV” days the porch light was left on for him again.

5. Protect yourself. In this case, you definitely have to protect yourself sexually cus he was wilding going from couch to bed. Did Tasha and Issa overlap? Then again wasn’t the party on a Thursday so I guess Tasha is in the clear from getting same day service. Not just protecting yourself sexually, but emotionally and mentally as well. The end of episode 3 shows Tasha upset with Lawrence for being who he has been from the very beginning.. Not her boyfriend. She accused him of being a f— boy, and pretending he was into her. He’s guilty of being an ass yes, but he was never hiding his intent of not being her boyfriend. He agreed to go to a family gathering which could be mistaken for a boyfriend duty (read last week’s recap) but since he hadn’t do anything else that was similar to boyfriend duties, I have to say it was just dumb on her part to think it meant something. Sis, sometimes you have to take the fairy tale goggles and see exactly what’s before you. You gotta take the goggles off and see the Prince is really a bullfrog you been sleeping with. Now he’s liberated, he’s really feeling himself, and he’s back on the scene and gonna find the next thing that can stroke his ego until he’s healed from the cheating in #1. A person will only do what you allow, so make sure you are allowed what you wanna deal with.

What are your thoughts on the whole Lawrence and Tasha situation? Is it over? Will she take him back again?