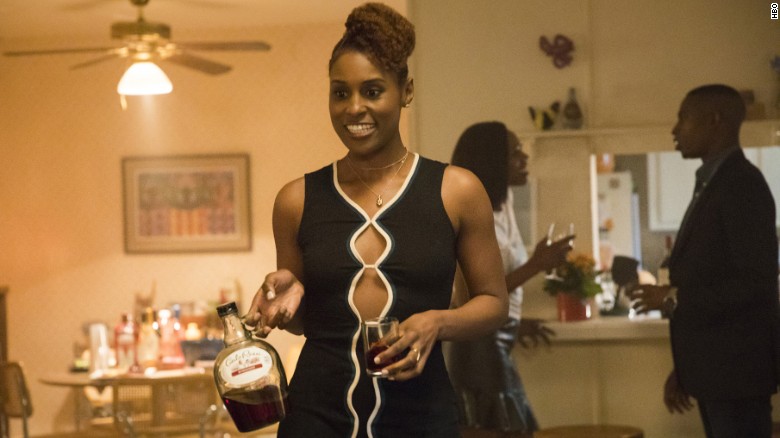 Issa recap of THE highly anticipated, long awaited return of Insecure. And, as usual it delivered.

Let me just STAN for a moment and say I love how relatable the show is and I can identify with each character and situation on there. Issa is my spirit animal AND my best friend in my head. (BTW I literally cringe when I see people say that “best friend in my head”stuff online, y’all sound real crazy) .. But dammit Issa Rae is just so …

Here are my Top 5 thoughts from Season 2’s debut.

1. Issa. Soo the season begins with Issa trying to jump back in the dating scene. She’s on a date daydreaming that she’s out with Lawrence. She’s broken, she’s disinterested.  She’s probably hoping to find a frog prince but at the same time not really tripping if she doesn’t. You know that ugly phase of dating after a breakup where you’re just doing it to keep yourself from feeling like a total loser because you think your ex probably is “outchere.”  But you’re not really, really interested in anyone.  Yet, you’re still detoxing, decomposing .. Withering away on the inside from the emotional scars left by your ex.

In fact, you might go on a date just to tell a complete stranger how much of a horrible *cough* fuck-up you were and make them relive that train wreck of a relationship with you. Knowing that what you really want is for said stranger to TELL you how much of a horrible *cough* fuck-up you were.  Yes call me awful and petty and scum of the earth.  And can you “Say it witcho chest!” Please. Cus I need closure, my ex ain’t speaking to me, and I can’t afford therapy.   They say therapy can come in many shapes and forms. Don’t be too bad and boujie to get you some unconventional therapy.

On one of those really bad post break-up days, maybe you’ll find someone slightly interesting enough that after 5 cocktails you’ll be so incoherent (desperate) and get out a few #hurtbae romps in the hay with them. Then block their number and delete their entire existence from your life. Unconventional therapy, remember.

2. Ole Molly. She appears to have suppressed her urge to engage in fruitless relationships for the time being. She looked like she lost her sparkle a bit but yay for growth, however long it lasts. She’s focused on her career at the moment aka operation CoinStar and feeling a bit dejected after learning her white male coworker is making more money than her for less effort. Chileeeee don’t get me started on being overworked, underpaid, AND under appreciated. Who else out there is still waiting for that promotion they deserve?? I stand with you Molly, girl!

3. Lawrence. Bruh!! He done went from the unemployed, same sweat pants for 5 days wearing, no shapeup having,  forgetting birthdays Lawrence to having a job, getting a fade, making a few coins, throwing mass amounts of d$ck Lawrence. Talk about a glo up. He’s out here throwing hurt d$ck too. Cus he’s trying to run from the pain of Issa’s cheating. Y’all know he ain’t really into old girl. She’s a convenience piece..a placeholder .. a soft bed and a warm behind on the weekends. He’s on an air mattress for crying out loud.  You know you can’t pillow-top an air mattress. Let’s just hope he’s not careless enough to knock her up. He ain’t thinking clearly y’all. #TeamIssa

4. Issa Gathering – Let’s ignore the fact that Issa thought a gathering at her house would be the best way to attract Lawrence. Y’all know he copes through his penis so he would have been knocking down half of Englewood had he shown up to the party. Sis you just got caught cheating, now your having a party with dudes, in your apartment that y’all shared, with wine and weed. Anddddd you invite #hurtbae. Not sure if that you thought that one all the way through sis.

The gangbangers “brashing” the “barty” and dancing literally had me laughing out loud.

5. Issa hit & run – Literally, he CAME, he saw, & conquered in about 4 minutes of quality TV beating. I think we all were expecting/hoping for some makeup sex between Issa and Lawrence. But ewwww, Lawrence you wilding. First, don’t be popping up, cuh. You don’t live there no more, remember. “Mister mail me my mail!” Second, wasn’t no strapping going on?? In these times of Usher, you gotta take precautions with your sexual health and well-being. Nobody got time to be leaking green anything and you damn sure ain’t got 1.1 million to be paying somebody in court for their vaginal pain & suffering. Third, ain’t no hit & runs here.  But Miss Bank of America can get some spooning til the sun comes up … Like THE nerve of this dude. THEN, he gives my girl a mouth kiss (yuck again) and leaves her there wondering what the fuck just happened.  Yes #hurtbae came through with the #hurtdick and now he’s got my girl’s mind all fucked up.  He came through with the E5 tornado d$ck.

You know that d$ck you thought fell from the sky, well it just comes through destroying everything in your life in like 3 mins.  Your holding onto the bed spinning around in your room, while destruction is happening all around you.  When the dust settles 15 mins later, your outside on a pile of debris sitting in your bathtub trying figure out where your living room went.  You saw Issa sitting on that couch.  She realized she wasn’t in Kansas anymore and didn’t have a clue where the fuck Toto was.   Anyway, I’m screaming at my tv as he walks out “Really Lawrence!! Who hurt you Lawrence!!! Who.hurtttt.you!!”

She’s gonna need one of Molly’s therapy sessions to make sense of what just happened to her.  Hang in there sis! It happens to the best of us. Anybody seen a Groupon for some therapy? I’m asking for a friend.

What were your thoughts about episode 1? Are you #TeamIssa or TeamLawrence??