I know it’s not December yet, but this is the most wonderful of the year for a baseball fan. October marks the end of the regular season and the beginning of the postseason. An all-out battle royale between the 10 best teams for baseball’s biggest prize.

I must say that this postseason has really started off with a bang. The Wild Card games were exactly that…WILD. The Diamondbacks slugged their way past the Rockies while the Yankees dug themselves out of an early hole to take down the Twins. Now the test for both of these teams lies in their next opponent, the best teams in the AL and NL respectively. The Yankees travel to Cleveland to face what is probably the hottest team in baseball right. The Indians went on an historic winning streak that catapulted them to the top of the AL and past the Astros for the #1 overall seed. The Indians are still hungry and the World Series loss from last year haunts them.

The young Yankees shouldn’t even be here, let’s be honest with ourselves. They were in rebuild mode, a mode you NEVER hear about the Yankees being in. Yet, here they are in the ALDS with AL Rookie of the Year shoe-in Aaron Judge, who also homered in the Wild Card game. The Yankees have bats so scoring isn’t the issue. Cleveland has bats as well, but their pitching is eons ahead of the Yankees so I don’t expect this series to go on very long. On the flip side, the Arizona Diamondbacks will travel to LA to meet the Dodgers, who backed into the playoffs after a hot mid-season and cold close to it. I have to be honest, I’m a Dodger fan first and foremost, I can admit that the Diamondbacks scare me. If it wasn’t for the hot streak the Dodgers had, the Diamondbacks would have won the division. This team is THAT good. They have what it takes to make a run. If the Dodgers don’t get solid pitching from Yu Darvish, Rich Hill and Clayton Kershaw…all those wins will be for nothing. 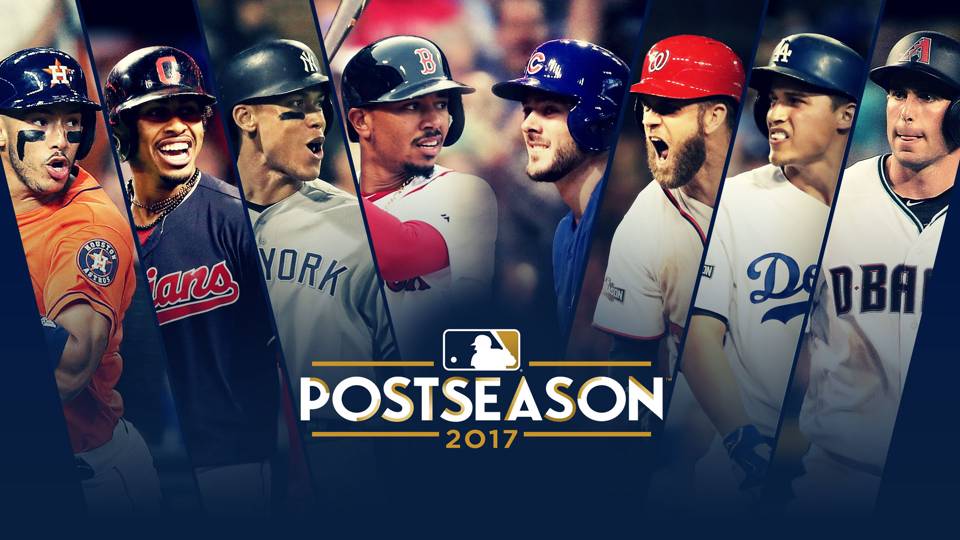 The Red Sox, winners of the AL East, will travel to meet the AL West champs in the Astros. This is a match up that I am not necessarily looking forward to, partially because I just hate the Sawks. Because on paper…The Red Sox are over-matched in nearly every position on the diamond. But this is why they play the game. The Red Sox have beaten the odds before, so who’s to say they wouldn’t do it again? Chris Sale will start game 1 against a revitalized Justin Verlander for Houston. Verlander has pitched in the postseason before, Sale hasn’t. Will the bright lights hurt or help Chris or is this the moment where Verlander shows his true form? We will find out in a couple of hours.

The last set of NLDS games are between the reigning World Series Champs and the Washington Nationals. The Cubs have been flying under the radar during the second half of the season and have been doing work quietly while tuning up for the playoffs. First things first, are they still as good as they were last year? Yes and No. They don’t have as much firepower as they had last year, but that doesn’t mean that the guys won’t put something together and make a push. They are still the champs, so you have to respect it.

As for the Nationals, health is the elephant in the room.

How healthy is Bryce Harper?

How healthy is Max Scherzer?

The two best players on the Nationals have been a little banged up lately and normally I would say that this team can’t win without them. But this team CAN win without them. Their bullpen is healthy. Daniel Murphy, Anthony Rendon, Ryan Zimmerman, Stephen Strasburg and the rest ARE healthy. The Nationals really do have a super team this year. I know they haven’t gotten out of the Divisional Series before, but dammit this has to the year. They’ve beaten the Cubs four out of the seven times they played this year. I hate the term, “World Series or bust”, but this HAS to be the case for the Nationals. No better team to start this run off on, than the defending World Series champions.