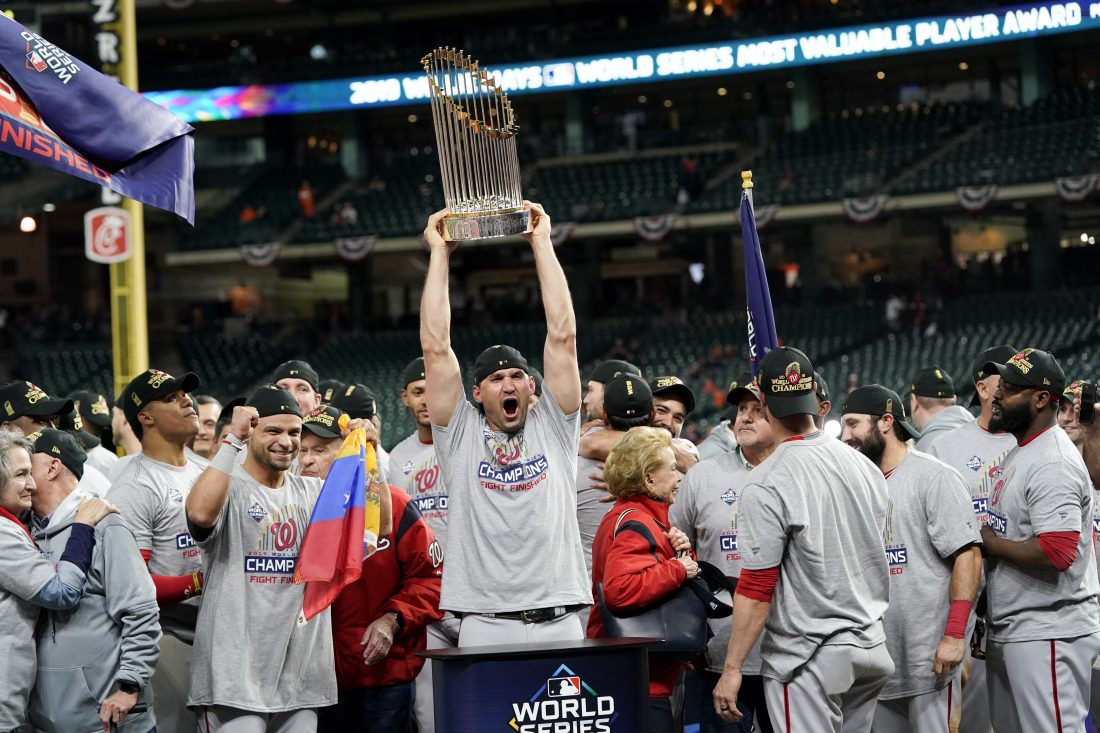 “Man…I gotta go to work in the morning!”

That’s all I could think about heading home after last nite’s World Series clenching festivities.

The 2019 World Series is officially over and the Washington Nationals are indeed world champions.

Hol up…what?!? Say that again for the people in the back.

OUR WASHINGTON NATIONALS ARE WORLD CHAMPIONS!

WHEW! Now that we have gotten that out the way, let’s talk about this team, this region, this moment- shall we?

Getting to this moment was not easy for the Nats – and it shouldn’t have been – but we are here and we are all rejoicing.  Some people are rejoicing because this city has won another championship– the 3rd major sports title in two calendar years.  Others have become engulfed in the positive wave of emotion that sports can bring to a city/region and are learning the great game as they go along.  Older fans are reveling in emotion as their city – which has had two teams taken from them in their lifetimes – finally gets to hold the Commissioner’s Trophy.

Then there are the Day One fans.

The fans that stuck with this team through the “Laughingstock Era”.

Nick Johnson, Brad Wilkerson, Alphanso Soriano, Cristan Guzman, Livan Hernandez, John Lannan, Chad “Flat Hat” Cordero…all those guys took a lot of bullets of ridicule from everyone including current fans.  Things were so awful here that a typo on a couple of our jerseys became the symbol of our franchise ineptitude.

Ridiculed nationally and an afterthought locally, what could change the tenor of the franchise? The new stadium? Nope….not just yet.

The team had to improve the right way, with shrewd free agent pickups and trades and most importantly, having your best draft picks pan out.

Yet, after four crushing playoff defeats and the defection of our beloved Bryce Harper to the hated Philadelphia Phillies in free agency this past offseason, this season started out with the most tempered expectations in quite some time.

After starting off the season as horrible as you could imagine at 19-31, little did we realize that from that moment, this team would show the world what they were made of.

All those corny aphorisms that I usually stick my nose up at and brush off, were literally the things that pushed this team forward to unforeseen heights that no one could envision.


For the first six innings, the Nats missed every opportunity and it seemed as if this dream run was indeed ending…but then we woke up.

With one out, Anthony Rendon stepped to the plate and when he lifted a changeup into the left-field stands and halved the Astros’ lead to 2-1, the momentum changed.

The script was being rewritten before our very eyes.

A walk for Juan Soto by Astros starter Zach Greinke, who pitched masterfully through six innings, ended his night right before the unthinkable happened.  Howie Kendrick – who honestly hadn’t had the best series at the plate – stamped his legacy in history with a two-run blast off the foul pole for a 3-2 lead.

In EIGHT PITCHES, Nats Nation went from death and despair to exuberance and ecstasy.

A couple more runs tacked on in the 8th and 9th innings made it all but official when Daniel Hudson entered the game to close the game and deliver a championship for this city.

I’ve watched a lot of sports in my day and I can honestly say that this run for a title was quite possibly the greatest, unexpected title run in team sports history…that is no hyperbole.

Lastly, on a personal note-

My Grandmother is a National, literally.  She was ceremonially selected by the Nationals in 2008 as part of an MLB commemoration before that year’s draft and when she passed away two years ago, the team remembered her in a press release.

This small gesture meant a lot to me.

One of the last things I was able to say to her during our last talks is that her favorite team would bring a title home soon.