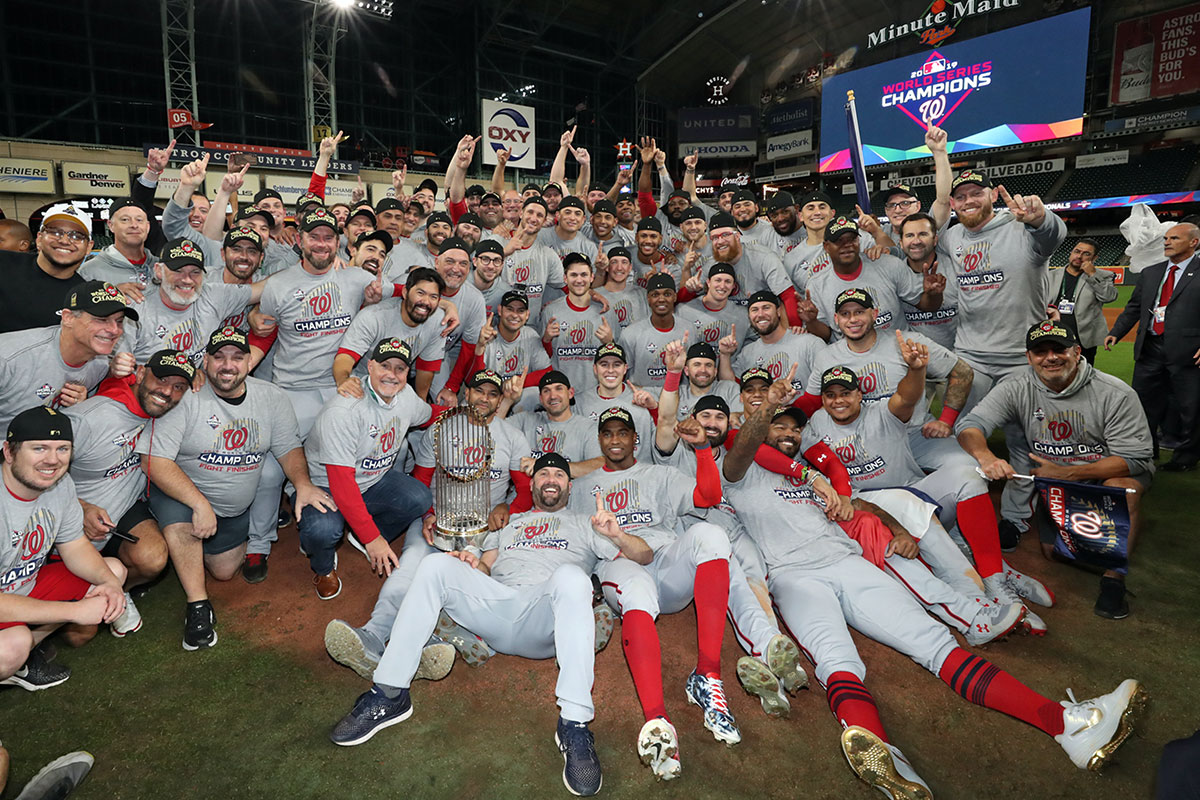 Let me start by saying this first.

The Washington Nationals are your REIGNING… (and)…DEFENDING…2019 WORLD SERIES CHAMPIONS.

Those words will never get old because nothing will EVER change that fact.

Now that I have gotten that out the way, let me now say this… I don’t care what happens in this 60-Game COVID-19 shortened season.

As a Nationals fan, I am happy with what was accomplished in the last full season, and why shouldn’t I? I’m pretty sure every Nationals fan would agree with that statement.

Yet, in the midst of everything that has happened in 2020, I am also happy that baseball is back. Sports as a whole is making its return and boy do we need the diversion from reality.

So in the spirit of sports, I present an abbreviated preview of The Nationals Title Defense in the Age of COVID.

You know the team that won the World Series last year? Yeah, it’s pretty much the same team with the exception of two major pieces that were pivotal to the success of this team last year. I’d go as far as saying that without these two, there wouldn’t have been a title for us in 2019. Anthony Rendon got the bag as Anaheim ponied up big bucks to team him up with the best player in baseball, Mike Trout and Mr. National, Ryan Zimmerman, opted out of this season due to the birth of his first son (CONGRATS!!!!), which is completely understandable.

I would have done the same thing.

These are two pieces that will be hard to fill, but you have to try. With Zimmerman opting out, this means our starting at first will now Eric Thames formerly of the Milwaukee Brewers. One thing I can say about this guy is that he is JACKED. Now will that translate at the plate? That remains to be seen. He batted .247 and launched 25 HR’s last year as a full time 1st baseman which is something the Nats didn’t have last year. First base was a platoon spot for the Nats, so it’s actually good that we have an everyday first baseman. With the inclusion of the DH in the National League for this season (and possibly the future), means last postseason’s ultimate hero Howie Kendrick will get his cracks at the plate and if anyone deserves the plate apperances, its Howie.

*By the way, Howie looks to be in REALLY good shape. Man’s was pumping nothing but iron during quarantine. *

It would be remiss of me by not mentioning the departure of Brian Dozier. He – along with Gerardo Parra – were guys that were spark plugs on the field and in the rocker room. I’ll never forget the wild dances, “Baby Shark” and just jovial demeanor, which is something you just can’t replace. I just wanted to spotlight our two “forever” Nationals first, no disrespect intended.

With the absence of Dozier, we had to find a second baseman. Enter, Starlin Castro. One thing I can say about Castro is that he is an Ironman. He has played all 162 games in a season twice and has averaged 147 games a year through his 10 years in the majors. He has a career average of .280; He has some pop on his bat, and he is a four time All-Star. I look forward to seeing what he brings to the Nats this year.

Let me just say that there is no replacing Anthony Rendon. It’s just not possible. No disrespect to Nolan Arenado, but Anthony Rendon is the best 3rd Baseman in Baseball. Period. The Nationals knew that. So instead of replacing him, they have decided to give their top prospect Carter Kieboom the opportunity to be the next manager of the hot corner. We all know what happened and why he is there, and I have come to terms with it. At the end of the day, this IS a business. Kieboom has the opportunity in this shortened season to show what he has. The Nationals have a history of grooming homegrown talent. Ryan Zimmerman, Anthony Rendon, Stephen Strasburg, Bryce Harper, Juan Soto, Michael A Taylor, Victor Robles. We’ve been told the talent is there with Keiboom, only time will tell how he pans out. He has extremely large shoes to fill at third base, but he also has a locker room full of young guys and vets to lead him on his journey.

Like I said earlier, with the exception of the guys I mentioned above, this team is the same. The Nationals still have the best starting pitching staff in baseball, this is not debatable. The bullpen has been bolstered with the emergence of Daniel Hudson, the signing of Will Harris (wonder how the convos between him and Howie have gone, LOL), and a possible full season with Roenis Elias to add to the core of Sean Doolittle, Tanner Rainey and Wander Suero. The bullpen shouldn’t be the question mark for them this season.

The Nats proved that pitching and timely hitting can win a World Series. Now do they have enough to go back to back? I think they do. Trea Turner, Victor Robles and Juan Soto are the youngest vets you’ll ever see. Adam Eaton, Howie Kendrick, Jan Gomes and Kurt Suzuki are guys that come to work and grind day in and day out. Add that to the starting pitching core of Stephen Strasburg, Max Scherzer, Patrick Corbin and Anibal Sanchez, I’d be crazy to say that I don’t believe this team will be anywhere near as good as they were last year.

I have faith in Dave Martinez. When everyone wanted him gone, I firmly said that he is not the problem, we need to keep him. He is a great coach and players love playing for him, so if things go left, hold players accountable. Which is what he did (behind closed doors), and the rest is World Series history.

As far as predictions are concerned, I have none. Other teams have tooled up to compete in the NL East, specifically, the Braves and Phillies. Mets are trash, yeah I said it…and The Marlins are very young and in the midst of a rebuild. So, Can the Nationals win the east? Yes. Will they? Who knows.  I just know one thing…If this team makes it to the postseason, anything is possible and I am here for it. In the meantime………