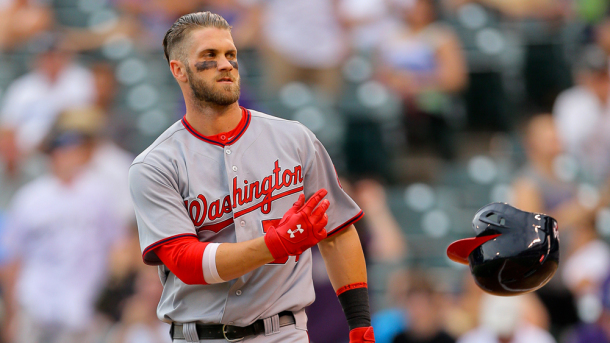 A quick caveat before going forward here: Bryce Harper has been my favorite baseball player since the day he was drafted by my Washington Nationals. He is now a Philadelphia Phillie, agreeing to a 13-year, 330 Million Dollar contract.

I knew this day was coming. It was inevitable from the day Bryce Aron Max Harper was drafted #1 overall in the 2010 MLB Amateur Draft.

Fast forward nine years later, after I saw this tweet, I knew it was over and had prepared for such.

Before then, he was just a “dream” so to speak, a generational talent with limitless possibilities to help pull the previously-downtrodden Nationals franchise from laughingstocks into respectability and hopefully, contention for the World Series on a semi-regular basis.

See, this is what a lot of people just don’t get or choose to remember. The term “tanking” has been the term du jour for NBA fans and media personalities for years because of the way to build a morbid franchise into respectability. “Tanking,” as most folks understand it, is a team’s intent to do less than everything it can to win. It is a concerted effort over several months (and perhaps several seasons) by a team to deliberately not be as good as it could be. It is considered cheap, disingenuous and dishonest, the byproduct of a flawed system where a team can be rewarded for being bad and where deliberately losing is thereby a strategic decision.

When the Nats moved here and lost 90 games in five of the first six seasons, the team was literally tanking before we even knew what it really was. During two of those seasons, the team ended up with the worst record in the league, which begat two generational #1 overall selections, the oft-injured pitcher Stephen Strasburg and the very next season, Bryce Harper.

Harper has been alot of things since his arrival, but the biggest thing is he is must-see-TV. That meant alot for a team that needed some star power. The fans needed it. The core fanbase (the ones that were ridiculed ad nauseum by others for just being fans of their hometown team), he and the new wave of players resembled hope.

Bryce was just so fuckin’ cool. That shit really matters.

I gave him the nickname “The Douche” years ago and it was nothing but complimentary. He has that aura of douchbaggery that we love in our athletes even though by all accounts, the kid was a GREAT person inside and outside the clubhouse. He ruffled the feathers of the “Good Ol Boy Network” that baseball lifers swear by.

During his career in DC, he produced an MVP season and some magical moments but none of them ended up in a World Series title, let alone a single series win.

At one moment, each major sports franchise here in DC had a young, budding star to build around and hopefully bring playoff success. The Skins had Robert Griffin III (remember him?), The Caps had Alexander Ovechkin, The Wizards had John Wall and the Nats had Bryce.

Now, after a little more than half-a-decade from the moment above, The Nats have lost Bryce, RGIII nearly lost a leg and a career and John Wall has been perpetually injured.

We would have never thought this was possible on that day but here we are. Sports are funny that way. You just never know.

In my humble opinion, the worst thing that happened to Harper in DC was the ascension of Mike Trout in Los Angeles, who became the best player in the sport which meant he would be compared to him for the rest of his days which is kinda unfair. Every moment, every AB became scrutinized. People talked about Harper’s postseason struggles as if Trout has been some sort of postseason juggernaut.

Wake me up when Trout has a post season at-bat.

One is the consummate professional and straight-laced megastar and the other is the wild, emotional and brash enigma. Kinda reminds me of how people felt about Sidney Crosby and aforementioned Ovechkin.

The straight-laced Crosby won and won big vs Ovie and the Caps when it mattered all the while the narrative changed from two young stars going at it every season building a rivalry to being the brash and emotional enigma being a detriment to his team.

The Capitals did not give up on Ovechkin and were finally rewarded with a championship. We will never get that moment here for our Nationals and it’s kinda sad.

I’m ALWAYS 100% for players receiving every cent their talent allows them to negotiate….100% of the time. As fans, it is not our job to build the teams, that is the job for the General Manager of each franchise so I can care less how much money another player makes.

At the end of the day, life goes on and my favorite player now plays in the same fuckin division as my boys and I will have to cheer against him.

The franchise is in MUCH better position today than it was the day Harper was drafted and that’s really all we can ask for.

I, and most of us Nationals fans will miss you bringing that daily electricity to Nats Park.

Now we have to boo you…and you wouldn’t want it any other way.