He’s the voice you hear daily on WE ACT radio. The voice behind many movements to improve communities across Washington, D.C. He’s currently using his voice to examine the legacy of the last pop star Michael Jackson. 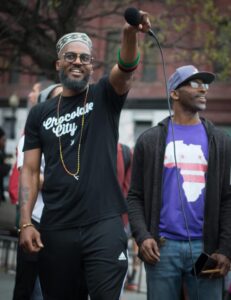 Native Washingtonian, Kymone Freeman, reprises his previously sold-out play, The Night MJ Died, at The Arc in Washington, D.C. on June 25th, the 10-year anniversary of his Michael Jackson’s death. This performance is part of the DC Black Theatre & Arts Festival, which runs from June 21-July 7. Following a successful debut at The Hamilton and follow-up shows in New York, The Night MJ Died tells the story of 5 strangers who met the night we lost Micheal Jackson. It was a loss felt deep and wide by many. The shock and pain crossed color and age lines.

With the recent documentary Leaving Neverland and surrounding allegations of impropriety with children, this performance allows the audience to ponder these allegations, who he was as a human being, entertainer, and his impact on our cultural conscience as a society. 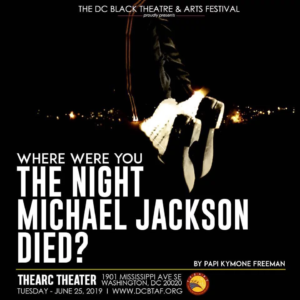 This phenomenal cast is made up of talented Washingtonian artists who have made their marks in music, fashion, and other mediums of artistic expression. The Night Michael Jackson Died will be performed at 7 PM on Tuesday, June 25, at THEARC, 1901 Mississippi Avenue, Southeast. $20. The DC Black Theatre & Arts Festival, which runs from June 21-July 7.