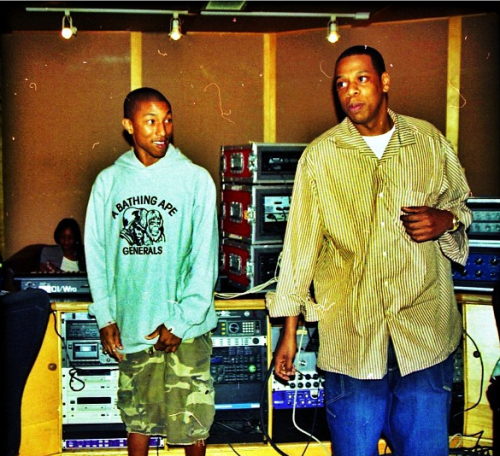 First let me begin by stating that this is MY LIST of favorite hip-hop based producers. So if you don’t agree, I don’t care. I’ll pin some honorable mentions that just might fall into the favor of the majority but the object is to get you readers talking, replying, while creating you own list. This is a hip-hop round table, nobody should have the same views.

Here’s a list of my favorite hip-hop producers & that one song that made shit real for my ears.

The movie clip of Pharrell playing this song for Jay during “Jay-Z’s Fade to Black” actually hit my computer before the song did. So when I first heard the high synthesizer & the gun effects while they were in studio I literally let out a loud “GYAAAAAAAD.” The reaction of the room in that clip spoke exactly what I was thinking. That song will always be one of my favorite hip-hop produced tracks of all time. I must mention The Clipse “Grinding”, NERD “Am I High” & Fam-Lay “Rock N Roll” as another stamped reason why The Neptunes/Pharrell & company will always top the others. Yeah yeah NORE fans we all know he got his shit off on “Supathug.” But put it on your own list.

It wasn’t until I heard this song live with the violins, the string instruments, the bells whistles & so forth. I had an out of body experience mid-show. A straight up “Take Me To Jesus” moment over this odd ball dude & his arrangement of this song. It still bangs to this day & always will. I can easily make a top 20 of songs that are awesome by my man’s in his “Sunken Place” but I won’t bore all the tough guys who swear they are not fans of the guy for their own ego. Other tracks such as “Flashing Lights” & “Never Let Me Down” will always get play in this ride & does deserve a spot at the top as well, but Diamonds holds that title so far.

“DON’T NOBODY BETTER SAY NOTHIN BAD ABOUT ORGANIZED NOIZE!” If you know me, you know these guys along with the entire Dungeon Family holds a large place in my soul for hip-hop music. These dudes gave me “Cell Therapy” from Goodie Mob, “Southernplayalisticadillacmuzik” by Outkast & the utmost slept-on “Watch For The Hook” from Cool Breeze. These dudes have a dope ear for sound. Almost haunting type beats that put you in a mental state of story telling or a dark fantasy. Just overall dope shit. “Jazzy Belle” is that song that holds all those attributes for me. I first heard this joint around the first week of high school & that bus ride heard no words/jokes from me for a solid month due to playing ATLiens over & over again. Nerd out moment for real & I didn’t care one bit.

Head nod material at it’s finest. This bamma is from Texas but somehow created the East Coast sound of the mid 90’s. The tough drums, muffled bass line & epic scratches has always been his signature sound, & will always define his ear. Very simple & authentic to the old school sound of hip-hop. Everybody from Biggie to Xzibit had to have at least one “Primo” track on their album to make it complete. “Come Clean” by my guy Jeru will always be my favorite from Primo. That song is an instant banger as soon as the beat drops, not to mention the hook was & still is used by two local go-go bands that can’t play without someone requesting that “uh oh.”

Some think he’s the king, others think he’s overrated. I personally think the dude was awesome. Underground conscious “tree hugger” hip-hop owes a lot to Dilla, along with mainstream producers who have admitted using his drums as the blueprints to their greatness. What he did with Slum Village is noted & normally the first that comes to mind when speaking of him but the shit he did for Pharcyde & De la Soul will forever be my favorites. “Running” & “Stakes Is High” are forever stamped as feel good music & its no denying it. Common’s “The Light” is a well known sample track from Bobby Caldwell but when Dilla added those signature drums & threw a little jazzy whatever the fuck in the mix…INSTANT CLASSIC!

One of the most electric combos of all time. These dudes pulled samples out of mid yesteryear & made modern day classics. Everything they touched for A Tribe Called Quest went gold. The songs they did for artist like Nas “One Love” will ring in ears forever. I must highlight Apache’s most famous hit “Gangsta Bitch” is a product of these guys. Out of the dozens of songs created the one that will stay in my Rolodex forever will be “Electric Relaxation” is like one of the coolest songs of all time. Not cool as is impressive or nicely done, but cool as in this shit makes me feel like the dopest muthaf***** in New York. AND I’M NOT EVEN FROM THERE!

Just Blaze pretty much defined my college years & if I didn’t put him on this list I’d be lying to myself. The shit he did for Def Jam artist alone could win in any argument over production. His hand clap effects on tracks were just as significant as that annoying “Just Blaaaaaaze” tag line. I always say this is the only producer that made fake tough guys dance, ol’ You Got Served ass dances too (Shout outs to Joe Budden’s Pump It Up). He hit me with favorites like “U Don’t Know” & “PSA” by Jay-Z, along with “Breathe” from Fabalous. The one that did it for me was Freeway’s “What We Do”….holy hell! The beginning of that song will still cause a “ooooooooooh” in a club full of 30-somethings no matter what city you are in.

Chicago’s own. Known for more than just being Kanye’s mentor & teacher. He turned Common into a house hold name in this genre, along with giving Big Sean some of the best tracks he’s rhymed over. I rock with No I.D. off the fact of you never know his true sound unless you are a producer yourself. I can never listen to something & say “oh that’s him” its not possible for me. For all the gems he’s dropped with Common “I Used to Love H.E.R.” is my all time favorite from him. That song is possibly the definition of hip-hop & the sound fits the lyrics perfectly.

He’s low on my list because I’m not that big on West Coast rap & plus I’m not pressed to mention him as the best ever like most group thinkers of the hip-hop community. I know his resume as we all do. Some of the best songs you’ve heard over two decades but guess what…..this is my list. Dre is the Godfather of the West Coast hip-hop sound outside of funk bands of the 70’s (which is where all his inspiration came from anyway). His work with Death Row & Aftermath can’t be limited to one song. However, I have to mention “Dopeman” from NWA’s first handful of hits as my all time favorite. That song made you want to do a crime knowing that shit wasn’t in your blood. It was a mind altering sound that was both melodic & hectic all in the same track. Before all the smooth heavy bass funk, it was straight up Public Enemy-style bangers.

It takes a dope mutha***** to take a saxophone sample from Jefferson Airplane & turn it into a hip-hop classic. Pete can still be considered underrated & that is insane to me. His tracks had this sound that couldn’t be matched due to sample placement & murderous key boarding. “The World Is Yours” by Nas had us all hypnotized by the accurate depiction of the street sound. Like you felt like you were cold as shit walking the NY streets when a Pete track came on. He & CL Smooth gave us awesome songs/albums but “TROY” will hold a place in the hearts of many. That track had so much in it that it made you sad for their homeboy who passed without even listening to the lyrics. That will never get old to me. You can throw that on now & zone out into memory lane for at least 4-5 minutes, or however long the song is shit I don’t know.